Life in a Bomb Squad with Deputy Marshal Thomas Groff

This week, Robin was joined by Deputy Marshal Thomas Groff, Commander of the Rhode Island Bomb Squad. Thomas gave a great insight into life in a bomb squad - and how it's not always how it seems in the movies!

Bomb squad incidents are rare but highly specialized. So what does everyday life in a bomb squad look like?

“The day to day work of a bomb squad focuses on our readiness. Maintenance operations and training operations are generally the heavy lift for us.”

The team spends about 8 hours a week training and working through exercises. These exercises often involve complex settings such as confined spaces that require rope access. Bomb technicians take turns to create scenarios for the team to solve, complete with mock devices. Creating mock devices helps the bomb technicians to understand the electronics of the various devices they encounter. After successfully disposing of the mock device, the team then investigates all the different potential avenues to defeat it aside from the course of action taken.

Thomas described some of the highly specialized equipment that they use to control the incident from a safe distance. They make use of robots, portable x-ray systems, and drones to gain intelligence on the explosive, look at it from every angle, and inspect it. From there they can make a plan of action to dispose of the device as safely as possible.

“Being remote keeps people safer when it comes to bomb disposal.”

Drones are being used now more than ever by Rhode Island Bomb Squad. The major benefit of drones is that they can go downrange in place of a human. Compared to robots they have better cameras, they’re faster and they’re far less likely to be inhibited by any debris in the way. 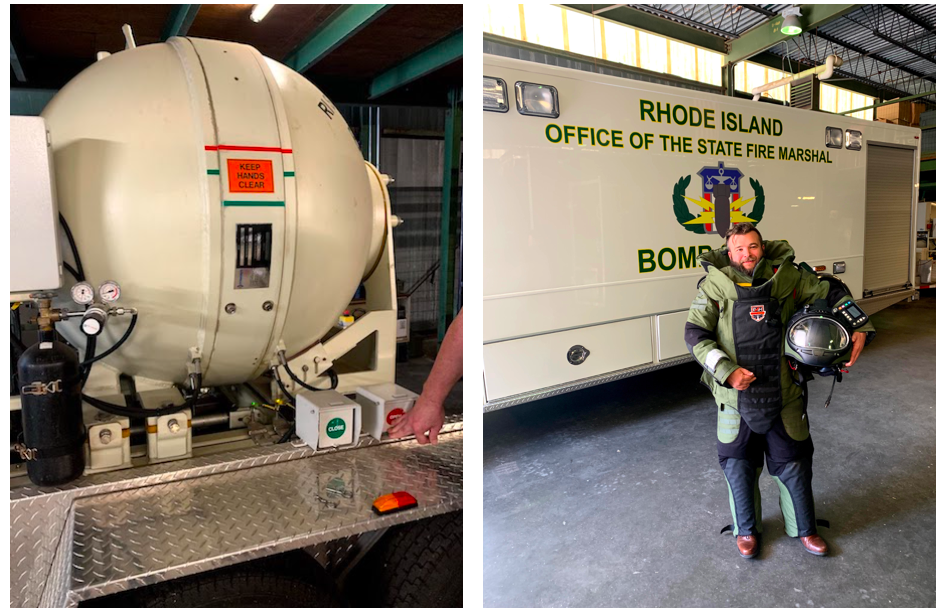 Where possible, the team does not transport devices but in cases where it is necessary, Rhode Island Bomb Squad makes use of their total containment vessel. This a fully enclosed container designed to safely secure, transport, and test explosive or chemical devices. Their total containment vessel looks like a large sphere, it is radiation-shielded and gas-tight, the team can also sample remotely through it.

What makes a good bomb technician

“The ability to work cooperatively is also imperative, as we often collaborate with agencies such as the Coast Guard, the Drugs Enforcement Administration, the FBI and the US Secret Service.”

The full interview is now available to watch back on our YouTube channel or you can listen back on Bravo Zulu, the official D4H podcast.